There is a topic that comes up a lot for me in the glass and shower business. Shower doors Las Vegas, is an item that I get asked about a lot so I decided to write this blog post about some of the variations of shower doors in Las Vegas. When it comes to shower doors, there are basically 2 types, bi-pass and hinged doors. There are several variations of each but for the most part that’s how it breaks down, sliding shower doors and swinging shower doors. We will discuss the benefits of each and show you how to choose which is best for you. Then at the end we will discuss some of the exceptions that might help you as well.

When it comes to Bi-Pass Doors, that is two shower doors that slide on a track, back and forth you have 3 main types, framed, semi frameless and frameless. Now, we are talking about the actual doors themselves, not the track or the hardware, that will be discussed later.

A framed bypass shower door enclosure means the glass panels that slide back and forth have a complete frame all the way around the glass, basically all 4 edges of the glass are covered by a metal runner. 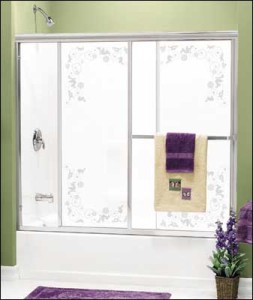 A semi-frameless shower enclosure means only a portion of the sides are covered with metal, usually the top and bottom. These will usually have a thicker glass as well, since thicker glass is stronger than thin glass and therefore can stand up to some abuse so you don’t have to cover the glass, the edges can be polished and exposed to some contact with normal household items without getting damaged. 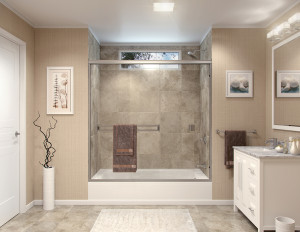 The last style of glass panel is the true frameless which means the glass itself doesn’t have any metal frame around it whatsoever, all 4 sides of the glass, is exposed, polished glass edging and no metal touches the glass on the edges. Usually this is achieved by drilling holes in the glass, near the top, to install hardware fixtures with rollers to allow the glass to slide back and forth. These usually have the thickest glass such as 3/8” inch and ½” glass. 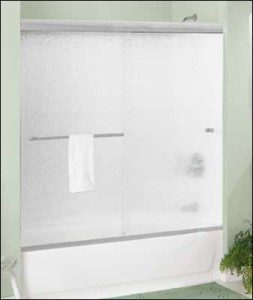 Savings Note: A lot of people think these frameless showers are a lot more expensive than framed showers, but that isn’t always the case. The price difference between ¼” glass and 3/8” glass is negligible. But the cost of aluminum is very expensive. So sometimes you will see framed showers are more expensive than semi-frameless because of the savings on metal. Since the frameless look is a more luxurious look, make sure you price out frameless, you can get a better look for less money.

Here is a video you can watch explaining the differences.

Now there are a few other things to discuss on bi-pass shower doors in Las Vegas and that is the hardware and the frame. Usually shower doors will come with a towel bar. These are always metal and are fastened to one of the glass panels in a few different ways. In a framed unit, it’s simple, the metal towel bar is fastened to the metal frame of the glass panel, as you would expect. On the semi-frameless it isn’t so easy since there is no metal on the sides to connect to. On these normally the metal towel bar clamps to the sides of the glass and runs along the center of the glass giving you a place to hang your towel. They usually wrap around the edge of the glass, and are glued in place. Don’t worry they have been gluing stuff to glass for years and have it down pat. Once that glue dries, that towel bar isn’t going anywhere unless the whole glass panel goes with it. The coolest way to do a towel bar is the way it is normally done on frameless shower doors. They will drill two holes in the glass panel at either end. Then they will insert posts into that hole and then run a metal bar between the two posts. This looks great and has a real upscale feel to it. It requires some precision and the holes are usually measured and cut by a machine that makes sure the right size hole and distance between the holes is achieved to make sure the metal rod fits.

There are also considerations with the outer frame of the shower enclosure. There are different variations of these but for the most part you have two options. Full framed or top and bottom. Full framed, means the entire enclosure is framed top and bottom and sides. The top and bottom is to guide the panels as they roll, (with rollers either at the top or the bottom) keep them in place and provide a channel for them to slide into at the sides that helps keep them in place and helps keep the water from spraying out at the sides.

If you are less concerned about water proofing, you can have just a channel at the top and bottom and the glass panels just but right up against the wall or tile. This isn’t as water proof as a framed unit, but as long as the water stream isn’t spraying directly on the seam, not very much water will come out and soak the carpet. There is also a system where the glass panels just hang on a top slider bar, like a barn door, and at the bottom there is just a small piece of hardware that acts as a guide. So, that is pretty much it for bi-pass shower enclosures, there are a few other minor exceptions but 99 percent of the bi-pass shower enclosure options have been covered in this short article. Let’s move on.

The other main category of shower enclosures are hinged shower doors. These are basically what they say, the enclose the shower stall with a glass door that operates on a hinge and swings in or out or in and out. You have the same basic types at above, framed doors, semi frameless and true frameless.

Similar to sliding shower doors, we start with a complete framed unit. 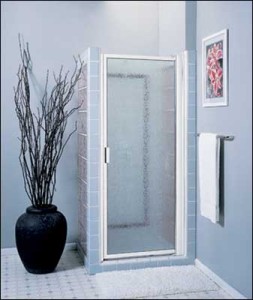 The entire opening has a frame around it, and the glass panel itself is also completely framed on all four sides with metal. This full frame allows you to use a thinner gauge glass since the strength is there from the metal frame, but also requires more metal, and metal these days is the most expensive part of a shower enclosure. A lot of times, these framed shower enclosures are used in situations where safety is important, like gyms and fitness facilities or in hospitals and senior assisted living. If the edge of a glass shower bangs on a metal piece of a wheelchair It could shatter.

There are also some design styles that call for framed units, and they can be quite pleasing to the eye if used in the correct setting. Since frameless shower enclosures have been all the rage and considered avant garde for several years now, they are no longer the elegant option they once were. In new designs, you are starting to see frames units being at the forefront with some additional design elements mixed in. Such as the picture below.

The next enclosure type on the list is the semi frameless shower enclosure. There are a few different variations of this shower enclosure but in short, at least some portion of the frame, or the glass panel is going to be lacking a metal element to it. Sometimes 3 sides of the glass are exposed with one long piano hinge on the hinged edge of the glass is the only part of the glass that has metal. Sometimes the opening has a full frame in this case, and sometimes it only has a bottom track for waterproofing and a side track to mount the piano hinge to the wall. In any case, there are a few ways to achieve a semi frameless look as pictured below, but the semi frameless unit, by definition, simply means at least one edge of the glass or framed opening, is lacking a metal edge. 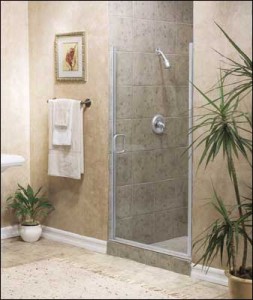 Finally, we have the frameless shower enclosure, which by far is the most expensive of all option, the most custom, and the most elegant of the option for enclosing your tub or shower. Frameless showers are usually characterized by heavy plate glass such as 3/8” glass or ½” glass. 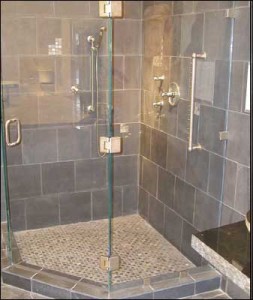 “One quick side note on ½” glass. In most cases, it doesn’t lend the high-end appeal that a lot of people think it might just because its ½”. Generally, it just costs more, and is heavier, limiting your options, and increasing the number of pieces of hardware you need to hold up that heavy weight. Plus, for that additional 1/8” the goes unnoticed to untrained eye, the price of the glass essentially doubles and the additional hardware is a significant cost as well.”

This heavy glass is secured to the opening by hinges and hardware clips as shown here.

There are literally endless ways you can assemble your frameless heavy plate shower, that’s what’s so great about them. Also, in most cases they are the most jaw dropping upgrade you can make to your bathroom when remodeling. I have done several showers and when someone remodels their bathroom, it isn’t the paint, tile or granite counter tops that takes their breath away, it’s the heavy plate frameless shower that really makes the biggest difference.

People are generally pleasantly surprised for the price they need to pay for such a dramatic increase in visual appeal. We have frameless shower units starting at $899 installed. The main difference between framed shower enclosures and semi frameless or framed units is customization.

For the most part, framed and semi frameless shower enclosures are mass produced to fit a fairly wide range of opening sizes, but they are limited. But in many cases, the same “shower enclosure in a box” can fit opening sizes up to 6 inches different on the width and essentially any height. There are tracks and guides that allow for these differences. Also in many cases the doors stays the same, and you only order a customer size sidelight, and cut the rest of the metal on site to match the existing conditions.

However, with a few rare exceptions, frameless shower enclosures are completely custom. Especially in shower doors Las Vegas, you see some really neat custom designs and breathtaking combinations. Also, if you are creating a steam shower, you will most likely need to use a custom frameless shower enclosure to make sure you can block off enough of the opening to get a good steam going.

So hopefully this has been enough to get you started on your shower door enclosure project and should answer most of your questions. However, if you have a specific question, feel free to call us anytime, we would enjoy helping you with your project. Thank you.